Our man Hamish is back again with his take on Saturday’s game at The Cottage….

Fulham play host to Arsenal this weekend, with an early kick-off spot and the associated TV coverage. Added media exposure is probably enough to make any Gooner cringe at the moment, but for us Cottagers this is an eagerly anticipated opportunity to see how our new squad will be received.

Off the back of a shock victory at Sunderland, Fulham have opened the season with a rare away three points: somewhat unexpected, considering our position at the end of last season. With three points from the final seven games, eight players leaving, and confirmation from Director Alistair Mackintosh that the summer budget would be nil, things looked rather bleak.

Yet somehow, Martin Jol may have kept our dreams alive, by intelligently sourcing from the loans, frees and plus-thirty market. Additions include England duo Scott Parker and Darren Bent. Parker is what we have lacked in the hold since Danny Murphy’s departure, and Bent is sure to be amongst the goals, competing for the shirt with Bryan Ruiz. New keeper Maarten Stekelenburg is well proven between the sticks, and there were early signs from Adel Taarabt, that Fulham may have at last acquired a player on Berbatov’s artistic wavelength, with some tasty flashes of link-up against Sunderland.

Unfortunately our defensive line up looks rather weakened. Stockdale may replace the already injured Stekelenburg (shoulder), and the inexperienced Briggs might have to cover at Left back, with Richardson injured (hamstring) and Riise seeking a late move. Walcott will no doubt have an absolute field day if he is running at Briggs all afternoon. A start for Parker is also unlikely, due to his lack of match fitness. Therefore Sidwell and new signing Derek Boateng will start as holding midfielders. If you Gooners can recall the calibre of tackle that saw Sidwell sent off the last time our sides met at the Cottage, this is unfortunately exactly how Boateng likes to play. Both look good with the ball, but without – as you might expect against Arsenal – they are a bit of a liability. No doubt their lunging tackles will yield many a yellow this season. 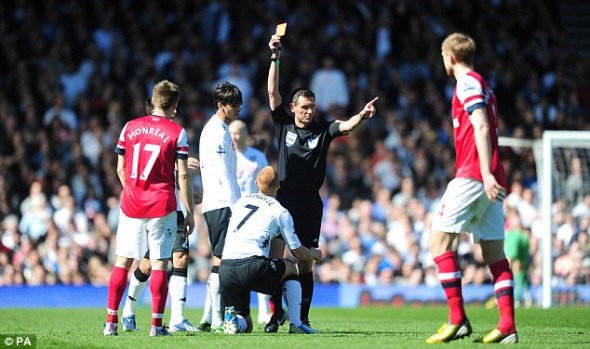 Our attack will obviously centre on Berbatov, supported by wingers Kasami, Duff or Dejagah, and either Taarabt or Ruiz playing behind. Every cottager is also quietly waiting for the saving grace of Bent to come on late, and score with his first and only touch in the game: wishful thinking perhaps.

I can only imagine that Arsenal will inch ahead of us by successfully controlling the midfield for most of the game. Wilshere, Cazorla, and Rosicky can pick apart most defences, but the finishing touch is occasionally missing. May I take this opportunity to remind the Emirates faithful that despite your transfer window woes thus far, your midfield is world class (second only to City, and perhaps Chelsea, in this league) and the results will come. Clearly a team needs more to contend for titles and progress in the Champions League, but your current set-up stops teams outside the top four from playing. The Villa game was a blip, and you deserve to be confident going into such league games. We will hope to catch you on the counter, but opportunities will be limited – Hopefully the writing of the script for Darren Bent’s first Fulham goal! Prediction: 2-1 to Arsenal.