Tonight sees last year’s finalist and one of the best teams in Europe visit The Emirates. A team built on a great footballing philosophy with a passionate coach, an exceptional group of players and a phenomenal fan base. They have set an example to the rest of Europe of how to build from a relatively humble beginning into a team capable of beating anyone on their day.

There is no denying that they bring the kind of test that we are yet to experience so far this year, the thought of this game has filled me with excitement for some weeks and now it is within touching distance.

The weekend’s performance has allowed us to build our confidence further and the team should go into this game with genuine expectations of the win. The news of Mathieu Flamani’s expected absence is a blow, his exceptional performances have been well documented this season and it will be vital for someone to step up into his place and take on both the defensive and organisational responsibility.

It was telling at the weekend that in the period between him going off and half time the team struggled with their shape. Norwich were allowed more space in between the midfield and defense and produced their best period of the game.

It was also interesting and slightly worrying to see how the atmosphere of the stadium changed in that short period. For the most part the fans were, once again, sensational. However, during this spell of Norwich dominance that the old groan, that we all know far to well could be heard around the stands. With the exquisite football we are playing at the moment it is frustrating to see loose passes and sloppy play but there are going to be times when we are not dominating the opposition. There will be occasions this season when we lose and lose to teams that many of us would consider inferior. This, sadly, is the way football goes. 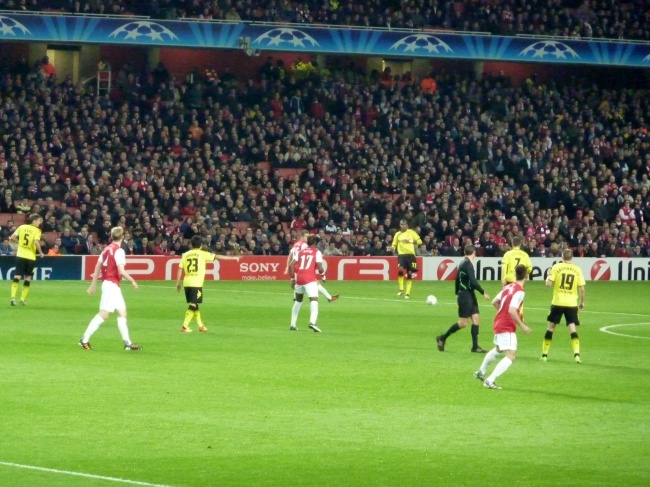 Tonight represents a real challenge and there will be very tough periods. But it is worth remembering how privileged we are as fans to have these teams come to town. Champions League nights, for me, as for the many are some of the greatest sporting spectacles around and some times in the absence of trophies it is easy to take these nights for granted. Barca at home will live long in all our memories despite a trophyless season that year.

It does not get much better than Dortmund under the lights. My prediction is a well fought draw and it would represent a great result, but even if it doesn’t go to plan, savour it, cause it’s not everyday we are treated to such nights!

Napoli: A Change of Midfield Philosophy?

I am sure many of you, as I have, have spent the last 24 hours attempting to read every last article on Tuesday night’s victory as possible. For that reason I will not go over the details. What I will say is as a regular visitor to the Emirates that was not only one of the best performances I have seen on the pitch, but also one of the best from the stands. There is a new attitude to us all within the ground, we walk to our seats with a renewed sense of optimism and excitement. This a much welcome replacement from the constant knife edge that we were on until just a few weeks ago. Chants of “We’re the North bank Emirates’ etc have not been heard for years, if ever. Supporting The Arsenal is fun again and long may it continue.
A distinct feature of Tuesday night was the set up in midfield, a line up perhaps born more out of necessity than choice. All five of the starters deployed would almost certainly consider themselves to be central midfielders. With this in mind one might have expected a lack of balance and an overloading in the centre of the park. What we experienced, however, was far from this. Arteta and Flamini provided the perfect platform to allow the front four the freedom to drift in between the lines and they did so with wonderful effect. One minute Ramsay would be wide right, the next playing centrally or wide left. The same could be said for both Ozil and Rosicky and this constant movement left Napoli with no answer. It was as close to a complete midfield performance than we have seen since the glory days.

In the aftermath of this win and given the skill displayed, it got me thinking if this is a way we could play regularly. Admittedly the likes of Ramsey would prefer a central role but his link up play with Giroud for the first goal was sublime and he provided the excellent assist for Ozil. It will be interesting to see if we try this set up more regularly. With Santi returning to the team, the skill we could posses in midfield is mouthwatering.
With both goals coming from the right hand side of the pitch I have to question whether our starter at the beginning of the season, Walcott, would have been able to produce such assists. For all of Walcott strengths he does not possess the sort of footballing ability that was on display Tuesday night. He has often come unstuck against top full backs and his decision making in tight positions is poor. I do think that Walcott has a part to play in the side. He has the ability to terrorise lesser full backs and as an impact player (arguably his best position) he can be very effective. But based on last nights performance his previously secure position in the midfield could well be under threat.
Last nights line up was not one that I thought would act with the devastating effect that it did. The introduction of Ozil provides a creativity that we have not had since the Fabregas era and the players he had around him last night responded phenomenally to it. For me there is no real reason to make changes from last night, despite some being played ‘out of position’. Let me know if you think differently…